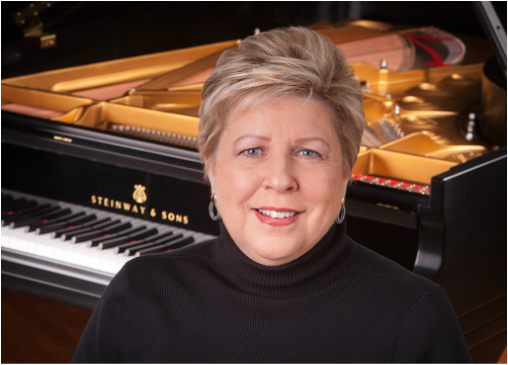 Marjorie Lee has appeared in recitals throughout the United States and Europe in venues that include  Lincoln Center, Kennedy Center, Curtis Institute of Music, Weill Concert Hall, and the National Gallery of Art.  Selected through national competitive auditions, she concertized throughout Western Europe as a United States Artistic Ambassador under the auspices of the United States Information Service and Voice of America. Appearing as soloist and collaborating pianist throughout the U.S. and Western Europe with artists that have included  Seiji Ozawa, Leonard Bernstein, Aaron Copland, Rafael Fruhbeck de Burgos, Mstislav Rostropovich, Alessandra Mark, William Warfield, Rick Harrell, she has given United States premieres of many works of Henri Pousseur and world premieres of works of Benjamin Lees and Meyer Kupferman.
Lee, a  Music Teachers National Association Master Teacher, has been featured by Fairfax County (Virginia) Association for the Gifted in “The Beauty of Music:  Reaching for the Stars”, in 2018 as a MusicLink Teacher of Distinction, and has received the 2018 Yamaha Teaching and Mentoring Recognition.
Formerly a faculty member of the Peabody Institute of the Johns Hopkins University, Western Michigan University, George Mason University and University of Maryland,  Marjorie’s energy is currently devoted to her thriving independent studio of 42 (ages four to seventeen) aspiring pianists, many of whom have been prizewinners in the National YoungArts Foundation.  Lee’s success as a teacher is evidenced by her students’ accomplishments as winners of top prizes in competitions in the U.S. and Europe, their successful performing careers and the major universities across the U. S. where they hold faculty positions. Many of her pedagogical ideas have been inspired by her work with Jorge Bolet, Irwin Freundlich, Adele Marcus, and, of greatest influence, Roy Hamlin Johnson. Her teaching philosophy was featured in the 2012 MTNA National Conference ‘Artistry in Piano Performance and Teaching’.  Noteworthy among countless awards, eighteen of her students have advanced to the finals of the Music Teachers National Association National Piano Solo Performance competitions, where four have been selected National First Place Winners.   Six of her students have been soloists with the National Symphony Orchestra as first place winners of the Young Soloist Competition.
Press Comments:
Hailed by the New York Times as an “eloquent performer”, John Rockwell wrote, “She is a steel-fingered pianist who can ripple through pages of music, offering firmly propulsive, tightly exciting accounts of the music.”  John Rockwell,The New York Times
“Marjorie Lee is a greatly gifted musician with fingers and personality of equal force.” Robert Parris, The Washington Post
“This was an eloquent performance by the pianist Marjorie Lee.”  Allen Hughes, The New York Times.
“Lee’s outstanding musicianship proved her to be much more than a fine pianist.  Her playing had all the ardor, dreaminess, whimsy and passion it needed.” Norman Middleton, The Washington Post.
“Marjorie Lee brought a pyrotechnic dazzle to her performance, a sustained dazzle that brought amazing clarity to her performance.  Fireworks ran through her entire recital.” Robert Parris, Washington Star News

Teaching Piano in Vienna VA. Since 1976
For more information on Marjorie Lee's Studio or Lee Studio's of Music please contact us via phone or email.